Miles:5 Locks:0  Lock miles: 5
First boat went past this morning at 6:08!
Weather forecast not great for this morning so not rushing to get the 2nd coat of gloss on the cratch. Will probably head back to base early afternoon then put the 2nd coat on then.
Rain continued through the morning so waited till about 11:00 to set off back to Nantwich. Stopped at Calveley services to top up the water and empty the rubbish. Used a fair amount of water washing the boat.
Even though I was careful getting into the cratch area I managed to scuff the new gloss paint So clearly not ready for a 2nd coat yet. Last night was quite cold and wet so it's not dried as well as expected. Will need to watch weather forecast and pop back to apply 2nd coat.
Trouble free trip back to base. Mooring a little challenging due to stiff breeze coming up the basin.
Had lunch on board and packed up. Set off home around 15:15.
Posted by Andrew Smith at 16:30 No comments:

Up early to continue work. First boats passed very early again.
Check the drying times on the paint and decided not to give Fertan the full 24 hours but get it rinsed off so I could prime the cratch area. After rinsing and degreasing the cratch area, I got a coat primer on. Was planning a 2nd coat but don't have that much on board so going to risk one coat. 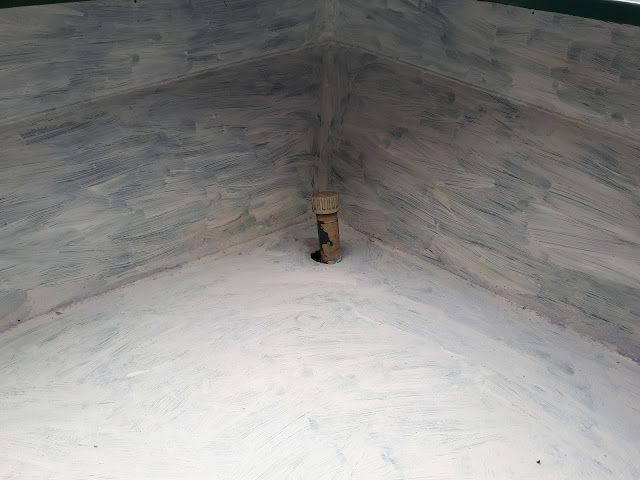 Then got a 3rd coat of stain on the deck board. When dry, that is ready for the non-slip tape.
Mid morning the farm across the cut started muck spreading. Absolutely revolting stench.... Not a pleasant atmosphere to work in.
While primer was drying, I walked into Bunbury to the Co-op, mainly to escape the stench. Unfortunately the Co-op had closed on the 31st July for a makeover!
So I walked back to the boat, collected the rubbish and headed off to the services at Calveley. After disposing of the rubbish, went to the cheese shop where I was able to get most of what I wanted. Got a couple of hot sausage rolls for lunch which made a nice change.
After lunch, I applied non-slip tape to the deck boards. Involved a lot of measuring to get the spacing right. Looks pretty good I reckon. Quite decorative! 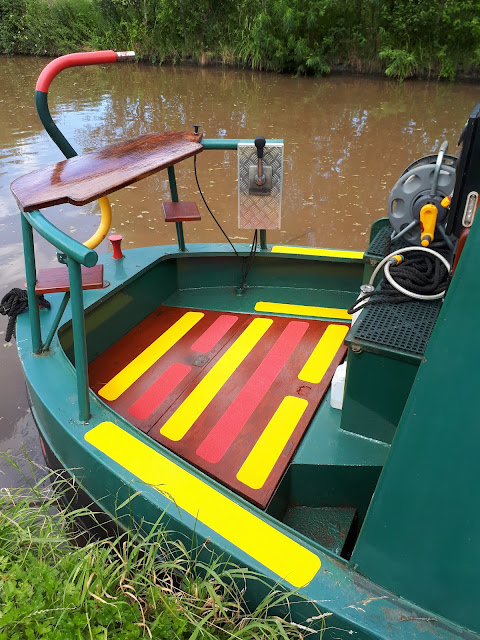 Final job for the day was to apply first gloss coat to the cratch area. Had hoped to put a coat over the paintwork on the front bulkhead but it clearly wasn't sticking. Will need sanding and priming. A job for another day! 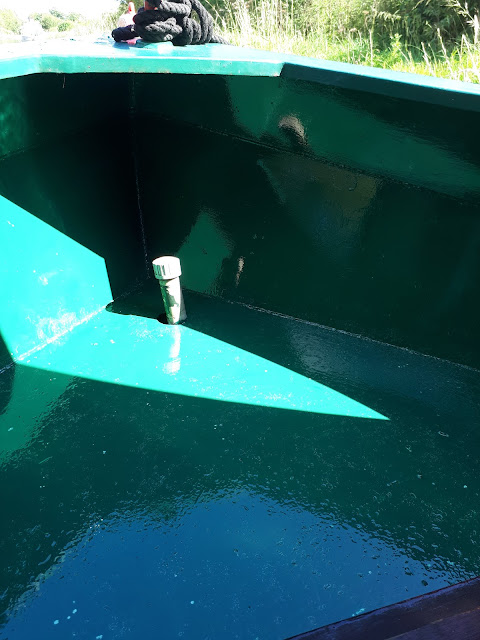 Had pizza followed by yogurt for dinner accompanied by a couple of glasses of wine.
This location has a fairly good 4G signal so I have been able to use the mifi router to connect both my phone and tablet to the Internet.
Quiet evening reading and Web-browsing / YouTubing.
Posted by Andrew Smith at 16:30 No comments:

Interesting start to the day when I looked out of the front window to see the 2nd boat ahead of me at a 45 degree angle across the cut!
There had been some boats passing quite early ie 6:45ish and they were not hanging around so the other boat must have had its pin pulled.
I got some clothes on and went to investigate. There was already one guy with a dog stood by the boat and another came off the boat in front of me. The dog walker had already tried knocking on the boat but no response. Either heavy sleepers or not there. I later spotted the padlock on the rear door - away...
I went to fetch a couple of spare ropes while one of the others investigated the stern rope (bow was still moored). He found the pin hanging in the water.
I joined my two ropes and gave one end to the dog walker. Then walked the other end along the boat and handed it to the other guy to tie to the stern rail. It was then easy to pull the boat back in and re-pin it.
Later in the day, the parents of the boat owner came for a short stay and I had a chat with the father. Gave him the tip about using two crossed pins which he took up.
After breakfast I got started on the boat. First stage was to wash the roof then polish using the surface restorer we got at Wrenbury Mill during our recent trip.
Next lifted the matting in the cratch area and rear deck. Plenty of accumulated muck under both. The front deck board was in poor condition as was the cratch floor. Washed both areas first. 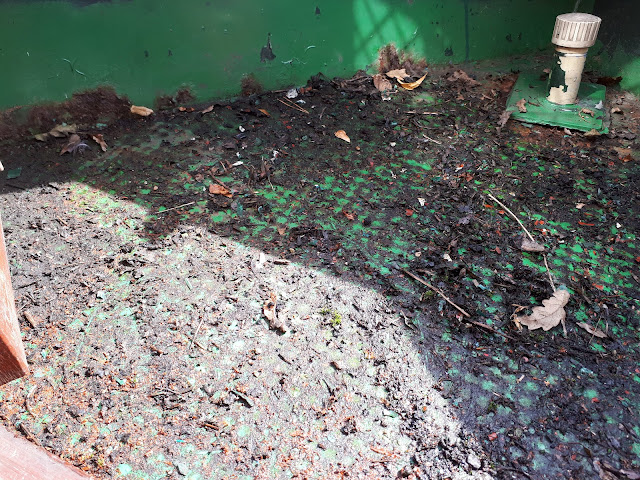 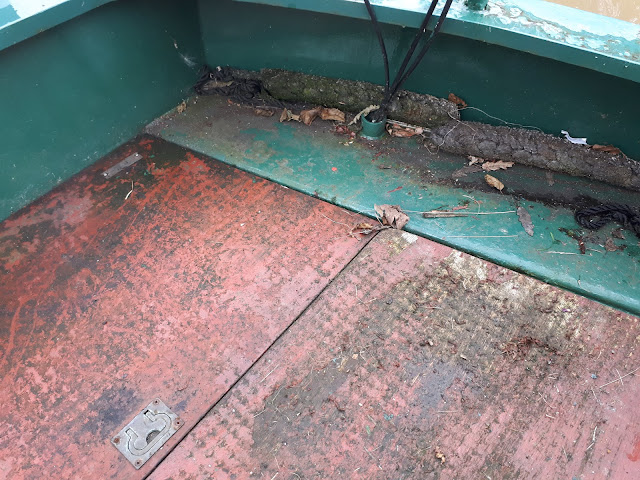 Sanded the deck boards and got a first coat of wood stain on.
Then worked on scraping / sanding / wire brushing the cratch area. Got that back to a reasonably firm surface then applied lots of Fertan to leave overnight.
Got a 2nd coat of stain on the deck boards. Front board needs a 3rd coat as it was mostly bare before I started.
Washed the poles and gangplank before replacing on the roof. Also the life ring which was particularly grubby...
Decided to dismantle the deck mats. They just seem to gather muck & moisture under them. Their pointy feet seem to damage the deck underneath and are a literal pain if you have pulled one back to, say, access the stern gland greaser and kneel on the mat... Took pictures to remember pattern if we did decide to put them back... 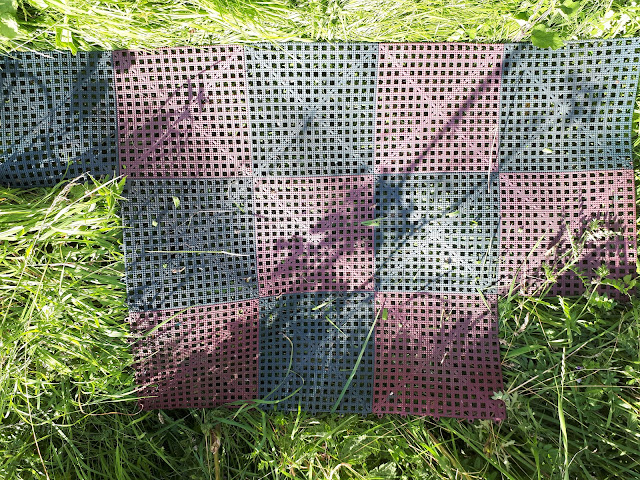 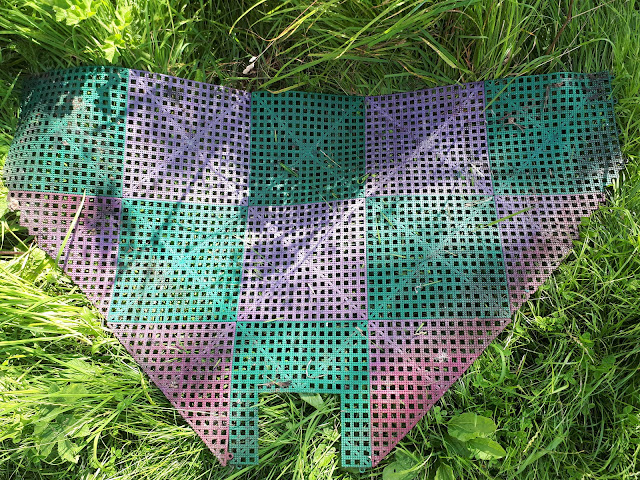 I have a lot of non-slip tape on board waiting to be used so will try that on the deck.
Pretty tired after a full day washing, polishing, scraping and painting so quiet evening with bresaola and salad for dinner followed by a yoghurt. All accompanied by a couple of bourbons.
Posted by Andrew Smith at 16:30 No comments:

Engine start 603.3 13:30
Engine stop 605.6 15:45
ADS solo trip Saturday - Tuesday to spend some time tending to the paintwork.
Got to boat around 11:30 after a food shop at Broughton Tescos. Unloaded car and then moved coal bags to car to clear the cratch area.
Replaced bed clothes and dinette cushion cover, emptied toilet and bought more blue & pink from the chandlery in between some heavy showers.
Lunched on Moroccan salad from boat stocks.
Set off around 13:30 as the showers cleared. Aiming for Hurleston where the moorings were empty when we came past last weekend. Naturally the moorings were completely packed today!
Could have moored at Barbridge but decided to carry on to Calveley. Went beyond the services and crossover bridge, span the boat in the cut and moored around 15:45 facing back towards Nantwich. Loads of boats out and about but securely moored using pins so not moving much as they pass.
Decent Internet signal here so will start typing up the logs from our summer trip as it is too late to start any work on paintwork.
Posted by Andrew Smith at 15:27 No comments:

Engine start 598.1
Engine stop 603.2 = 5 hours
Miles: 7 Locks: 9 Lock miles: 16
Leisurely trip back to base today. ADS keen to get home to his big bed! Also gives a free day on Sunday before AJS return to work on Monday.
Noticed that Baddiley Lock 3 top gate was leaking quite baddiley(!). 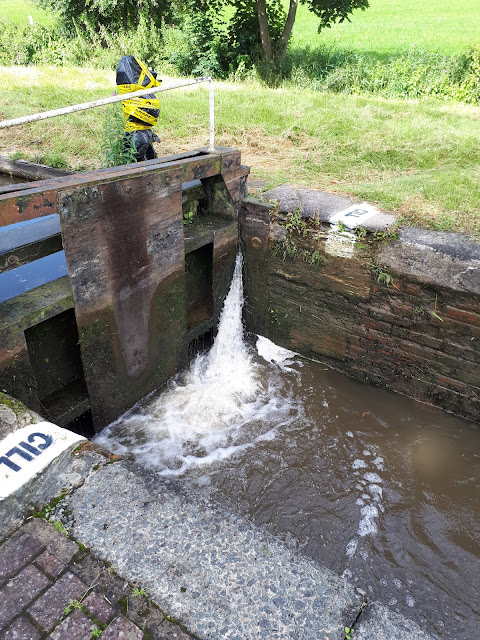 Had a chat with Mike Butler, one of the volunteer lockkeepers who maintains the Hurleston Volunteers Facebook page and has provided material for the Shroppie Fly Paper.
Noted the temporary repair on one of the Hurleston flight where the beam has split and been bolted together. 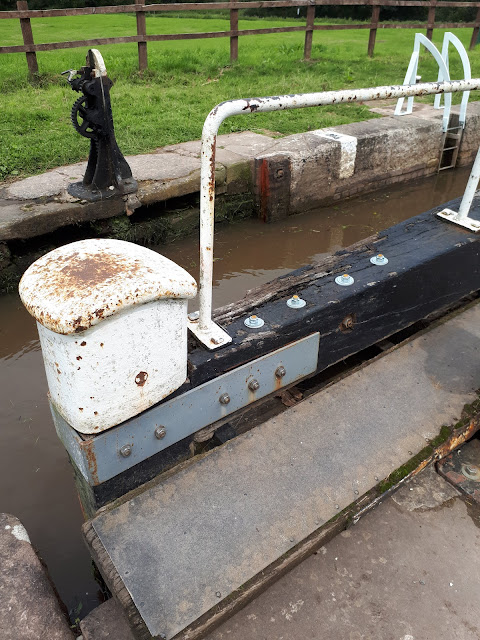 AJS drove back to base and managed the spin in the basin and reversing into our mooring spot with no problems (just a bit of coaching for the reverse!).
Lunch on board then packed up the car for the return home.
Excellent trip and very good to have finally done all of the Llangollen on our own boat. The Montgomery was an added bonus and it will be great when they manage to link the top end to the quite long navigable stretch further south!

Posted by Andrew Smith at 14:11 No comments:

Engine start 593.7 09:00
Engine stop 598.1 13:18 = 4.5 hours
Miles: 7.5 Locks: 10 Lock miles: 17.5
Weather mild and looking to be a bit sunnier. Short cruise to Grindley Brook. Emptied toilet and rubbish. Lockkeeper in situ so quickly through the staircase.
Met three boats going the other way with vast crews so an easy ride through the rest of Grindley Brook locks.
Noted again the reed growth on the towpath side affecting navigation between Grindley Railway bridge and Bridge 26. 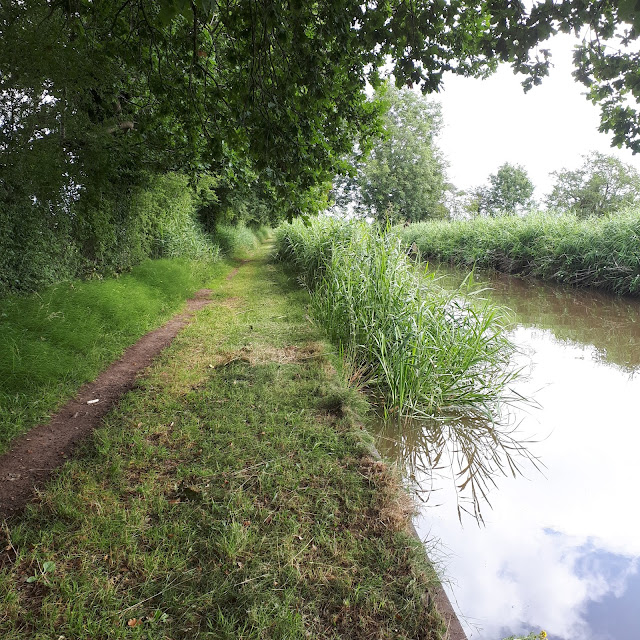 Pleasant boating - hot in the sunny intervals - following 2 other boats. Mid morning fruit for breakfast: coffee and 2nd breakfast at 11:30. 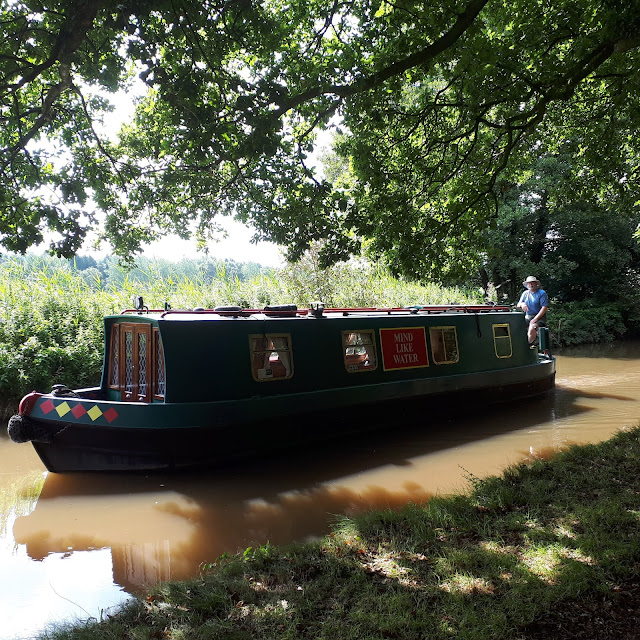 Boat ahead had problem at Marbury Lock with lock not filling. Some problem with downhill gates not closed properly - no problem for us.
A shady mooring spot with wide towpath alongside - let's hope the church bells are not too noisy tonight.
ADS did a bit of guitar. Salmon pasta for the good of our joints and a glass or two of booze.

Posted by Andrew Smith at 17:30 No comments:

Engine start 588.8 09:30
Engine stop 593.7 14:45 = 5.25 hours
Miles: 11 Locks: 0 Lock miles: 11 & 4 lift bridges
A false start today when we lost propulsion almost straightaway when moving over to let another boat past. A trip down the weed-hatch revealed - nothing... Whatever it was must have dropped off...
Properly underway again by 10:30 following 2 other boats in a companionable if slow convoy.
Made better progress when they stopped at Bettisfield. Rain failed to stop play and, beyond the Mosses, we caught up with another hire boat - a variety of steerers with a variety of skill levels but all happy and willing. Went through the Hassall's lift bridges in convoy and letting through a 3rd boat coming the other way (after some careful maneuvering round a moor boat with engine failure).
Soon after mooring the rain settled in steadily so we switched on the mifi router and got up to speed with accounts, emails, Facebook etc.
Posted by Andrew Smith at 17:30 No comments: