Andrew's first solo trip! Left work at 12:00 and travelled straight to Nantwich to check out Morrisons. Stocked up with lots of salad, grapes and a pizza.

Short journey from there to the marina and unloaded the car. Engine started and ready for off around 14:30. Little bit tricky reversing out of the mooring with a bit of a breeze to make it challenging. Didn't hit anything!

Turned right out of the marina heading for Wrenbury. Fairly busy. Followed a hire boat nearing the end of their week's holiday so doing OK.

Followed by another boat whose crew member came to help with the locks. Was initially quite grateful as had not single-handed through locks before. Thought he was a live-aboard but apparently not as become apparent when he tried to fill one lock with one of the downhill paddles open. Then later turned a lock in full view of an oncoming boat!

I tried to explain why this was a bad idea but was ignored. Apparently the oncoming boater explained things a little more clearly (!) as the crew member was looking rather sheepish when I met him later. Lesson learned I guess! They are on their way to an Elvis-fest at one of the pubs in Wrenbury this weekend.

Through the two Swanley locks and the Baddiley 3 locks by around 17:30. 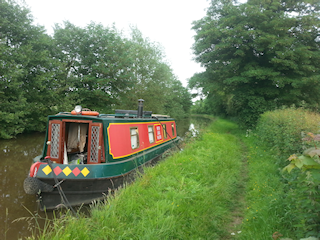 Moored around 17:45 in a quiet spot between bridges 17 and 18 just round the corner after bridge 17. Couldn't get right into the bank but seems secure enough with 2 piling hooks and a pin.

Cleaned the gas burners on the stove and then got the oven lit for pizza which cooked while I tried out the shower. Fairly cramped but works fine including the waste water pumper.

May have solved problem where the ice box in the fridge was getting very iced up. A sensor which should have been attached to the bottom of the ice box was hanging loose. Have reattached it and will see if it works...

Once phone is charged will try for a photo of this idyllic mooring.
Posted by Andrew Smith at 18:23